Many people have entrusted their whole lives and that of their loved ones to the religion they have professed their faith into. Soon after birth, a child’s baptismal commits them to an organized religion throughout their lifetime unless they decide to change religion somewhere along the way. It can either be because they have been disillusioned by the teachings of their current religion and how it affects their lives or the found something else that embodies what they truly value in life. 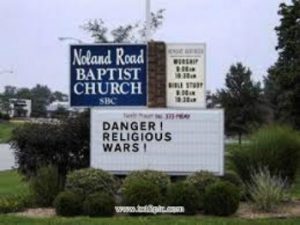 The truth is – we define religion. The people who founded these religious organizations determined the dos and don’ts and everything else they observe and follow. There often has to be an enemy, an evil force detested by the sect. The comfort of knowing there is someone superior and divine up there that looks down on all of us and guide us in everything we do likewise comforts us and eases all our worries away. For a country as progressive as the US, can religion still save the millions of Americans who may or may not profess a religion themselves or are we just deluding ourselves of a divine saving grace?

We human primates live and die for symbolic ultimate concerns. These concerns are our religion. For example, America’s religion could be defined as the market or through the mythic story that America is a benevolent and necessary nation. Every civilization and culture defines itself through myths, rituals and allegiances that call forth our willingness to sacrifice either our own self or others. Every civilization and culture hangs a sacred canopy over its way of life and divides the world between us and them.

Indeed, religion is a sociological and psychological necessity. It is a human invention, a fabrication that protects us from our terror of physical death and symbolic insignificance. Religion is very powerful, and we easily fall under its spell, obeying its dictates and its beliefs even though they are only human constructions, a fictive lie that we tell ourselves. In other words, religion is a necessary illusion that helps us organize our life and evolve into a future.

While religion was initially organized to save mankind from a certain doom, it has now evolved into a destructive force. Blame it on human nature, religion has caused more wars and conflict than any other thing in this world. Millions have died in religious crusades as one religion tries to wipe out the other. And if you say that those events can only be read in history books, you are largely mistaken. Just scroll your social media news feed and you’ll surely come across posts and news about religious extremists like ISIS Jihadists who made it their personal mission to wipe out every other religion in the world aside from that of Islam. Although this vendetta thingy is not taught in the Koran, extremists use this excuse as to why they orchestrate terror attacks that hurt and kill many innocent civilians.

If so, my point is this: like it or not, the main schools of traditional Islam have always embraced a theology of politics that recognises the proper use of force in the name of religion.

It is a distinctive feature of Islam that it is inherently, not just incidentally, political. In short, the traditional Islamic ideal is for any society to be governed by Islamic law. This implies that various state apparatus – including the justice and law enforcement systems – would be legitimately at the disposal of Islamic religion.

This is not controversial. Theologically trained traditional Muslims do not dispute whether political force can be used to enforce Islam. Instead, the controversy lies in debates about just what forms of force are legitimate, especially within a modern democratic context.

Obviously, these debates are complex, particularly in their handling of situations where Muslims are a minority. They are especially complicated when a Muslim minority perceives itself as victims of serious injustice. This is precisely the situation we are in. All contemporary Islamic political theorising takes place under the shadow of more than a century of Western geo-political impositions upon the Muslim world that have failed to produce just and prosperous societies. Given this melding of perceived injustice and a political theology that can legitimise the use of power, radical Islamism should be an unsurprising global development.

Many people wonder if we just all can try to get along. But then, it is easier said than done, believe me. While religions are actually cohesive units where people who profess the same religious beliefs unite and respect each other, their views may contradict the beliefs of others and result in many misunderstandings. People can get so fanatic when fighting for their religion especially that many mistake it for faith. But in reality, religion is more political than it is religious. And today, religion fuels terror attacks further dividing an already divisive world.