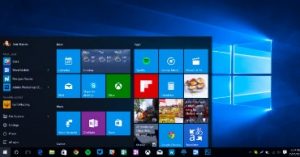 Of course, Microsoft – like Apple and Google – would like everyone to use the latest version of its operating system. It has therefore encouraged early adoption by offering a free upgrade to Windows 10 – again, like Apple and Google, except that Microsoft’s upgrade offer is only available for a year.

Either way, once you have installed Windows 10, it will be updated free for the life of your device. There will (probably) never be a Windows 11, because Microsoft is now producing two small updates each year instead of one big update every three years.

Whether it’s worth upgrading now depends on what sort of PC you have, but the more mobile, the better. If you have an old desktop PC with no touchscreen, no camera and no microphone, there are fewer benefits. (The touchscreen isn’t essential, it’s just nice to have.) If you have a modern Windows laptop or 2-in-1 with UEFI firmware, the upgrade is more attractive.

I say “the more mobile, the better” because Windows 10 is a mobile operating system. I know this upsets people who think their PCs should work just like they did in a previous century, but the whole technology world is changing and Windows is changing along with it. Microsoft’s boss Satya Nadella keeps repeating his “cloud first, mobile first” mantra, and Windows will continue to become increasingly mobile and cloud-aware.

Truly, technology is a wonderful thing. It enables us to do things we never thought were possible in the past. However, like any good thing, it has its drawbacks too. The more the advanced the technology, the more difficult it is for the human mind to comprehend all processes involved in its operation. And now, issues of spying using the Windows 10 OS have been circulating. So, I guess there goes our privacy down the drain.

But there’s something you should know: As you read this article from your newly upgraded PC, Windows 10 is also spying on nearly everything you do.

And the funny thing is that we’ve been warned all along yet most of us remain clueless about it. Remember clicking “I agree” to the company’s privacy statement. It’s all there all along but we just didn’t have the time to go over the terms and just clicked on to proceed to get it over with.

Well, here is Microsoft’s 12,000-word service agreement. Some of it is probably in English. We’re pretty sure it says you can’t steal Windows or use Windows to send spam, and also that Microsoft retains the right to take possession of your first-born child if it so chooses. And that’s only one of several documents you’ll have to read through.

Actually, here’s one excerpt from Microsoft’s privacy statement that everyone can understand:

“Finally, we will access, disclose and preserve personal data, including your content (such as the content of your emails, other private communications or files in private folders), when we have a good faith belief that doing so is necessary to: 1.comply with applicable law or respond to valid legal process, including from law enforcement or other government agencies; 2.protect our customers, for example to prevent spam or attempts to defraud users of the services, or to help prevent the loss of life or serious injury of anyone; 3.operate and maintain the security of our services, including to prevent or stop an attack on our computer systems or networks; or 4.protect the rights or property of Microsoft, including enforcing the terms governing the use of the services – however, if we receive information indicating that someone is using our services to traffic in stolen intellectual or physical property of Microsoft, we will not inspect a customer’s private content ourselves, but we may refer the matter to law enforcement.”

If that sentence sent shivers down your spine, don’t worry. As invasive as it is, Microsoft does allow Windows 10 users to opt out of all of the features that might be considered invasions of privacy. Of course, users are opted in by default, which is more than a little disconcerting, but let’s focus on the solution.

We’ll never really know if our gadgets are working for us or against us, like in this case. However, being cautious in all your computer activity whether online or offline helps a lot to maintain your privacy and prevent third parties from gaining access to your personal data. You have a say whether you want to proceed with the upgrade or not but like any other technology, it is better to stay updated and abreast with the latest advancements.

Although we can’t really stop these tech giants from proceeding with various upgrades to improve their products and service, you’ll likely be able to stumble upon an opt-out option on certain clauses that bothers you if you look hard enough. The web is also a great resource as you can research just about anything on the Internet now. Make use of it so you never have to settle for anything less.