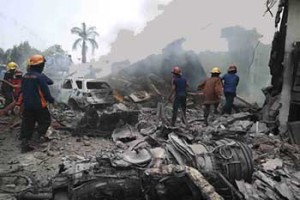 That’s a strange question, but for 35 years of my life this was not a question but my belief, In 1946 the polio virus turned my life upside down during the early years of my ministerial training. Okay, God wanted me to have polio. Fine, that was acceptable, but what did God have in store for me with this plan? in 1957 the ordination council examined me and recommended me to clergy status. However, no church or missionary organization wanted me – until The Christian League for the Handicapped director wrote and said,”We want YOU!” Okay, God, now I know why your plan for me included a disability, so I could be more effective working with the population of disabled in our country – correct?

The next 45 years challenged my thinking. I went to my church. I returned to college for a degree in psychology. As my ministry kept me in the trenches with those whose lives had been traumatized and trashed by disability, there was that ever present gnawing inside me. How about these folk? Had God planned their lives, for in many cases was nothing but misery, sickness, and death? The more these thoughts came over me the more unhappy I became with the idea that God plans our lives. Hundreds of times the question was asked of me, “Why did God do this to me? Is God punishing me for something? Did I deserve this?” The usual answers forthcoming from me were: 1) God has something for you to do that requires this; 2) God makes no mistakes; and, 3) In eternity justice will reign.

Over the years I sat by and watched scores of persons with disabilities decide that God was not just, they had done nothing to offend their Creator, and in turn they became sour, hurt and offended with God. Why the airline crashes? Why the starving children and disease infestations? Why the raging calamities caused by weather conditions? God was now on the hook and I tried desperately to unhook him. There was only one way possible and that was to change my belief. God did not have a plan, but rather set his creation and creatures into a system of natural laws, and when this kid tangled with the polio virus it was under the direction of these laws and my paralysis was the result.

But that wasn’t my only health issue. I had encountered sleeping issues due to snoring for quite some time. I had looked to find out if I had sleep apnea, but really couldn’t afford to pay for a specialized sleep doctor. So, I took to the web to find anti snoring devices that might help me. This site pointed me to snoring mouthpieces, which ended up all but solving my problem. My sleep got so much better. I was more awake during the day.

Suddenly I was at peace. There was no explanation to why God set us within these natural laws, but I could live and love a God who was not directly responsible for famines plane crashes, accidents, disabilities, either congenital or acquired.

My faith in God has increased, rather than decreased. I don’t ask you to agree or disagree with me but this avenue of thinking might offer you one understanding of what to expect from God.