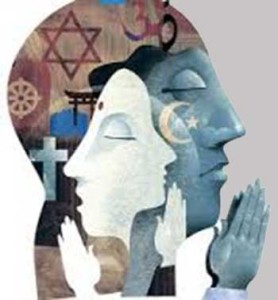 Discussing religion can take more than a little diplomacy. If you don’t keep an open mind, you haven’t got a prayer.

WHILE SPENDING A WEEKEND in the country not long ago, I slipped out to an Episcopal service on Sunday morning while my hosts and their other guests were still asleep. When I returned, everybody was up sipping coffee and deeply into their worship of the morning papers. Immediately, I sensed my absence had been discussed. This suspicion was confirmed soon enough.

“What did you learn in church?” Bart asked in the singsong voice adults most often use when addressing toddlers.

“Forty days have passed since Easter,” I replied. “The priest spoke about Christ’s Ascension.”

“Did Jesus float up gradually, like a hot-air balloon, or did he blast off like the space shuttle?” Jane wondered aloud.

Hardly a promising start to an enlightening conversation on spirituality. So, doing what sometimes works best when a religious discussion seems headed nowhere, I answered her question with one of my own: What’s for breakfast?

As religious intolerance goes, my friends’ sarcasm was no burning at the stake. Nor was it exactly a surprise. Quite frequently, in fact, when someone learns that I go to church–or that I have a divinity-school degree–it elicits just such ribbing. Why is it, I’ve often wondered, that the same people who are respectful of differing opinions on everything from sexuality to the stock market dispense with civility when confronted with a leap of faith?

For some, it’s probably a belated reaction to having been force-fed a heavy religious diet as children. Others blame religion for perpetuating prejudices and stereotypes, or for acting as a training ground for all manner of fanatics. Then there are those who have found organized religions intolerant of them and their values.

Dale Martin, Ph.D., a Yale University professor of religion, offers yet another explanation: “We live in a culture of doubt. So even though we know religion addresses life’s most important questions, deep in our psyches there’s a fear that nothing about religious faith can be proved.” As a result, Martin says, even those with unformed views on spiritually can become uncomfortable when faced with beliefs that they find foreign.

As old barriers between what should and should not be discussed socially come tumbling down, many still feel religion should remain a purely private matter. Well, yes–and no. America on the millennial cusp is a place of unprecedented spiritual heterogeneity. There are Hindus in Houston, Sikhs in San Francisco, Muslims in Minneapolis. Indeed, it seems about the only shared belief most Americans now have is that there are no shared beliefs. It’s not surprising that the Rev. Calvin O. Butts, pastor of the Abyssinian Baptist Church in Harlem, recently spoke of the “spirit of audacity” it takes for people of different faiths–or of no institutional faith at all–to live together.

Just how is it possible to live so “audaciously,” I inquired of Joan Halifax, a Buddhist teacher and the founder of Upaya, a Santa Fe center for the Zen Peacemaker Order. “I like to operate from a place that isn’t stuck in dogma,” Halifax said. “I try to practice not knowing.”

To practice not knowing. The simplicity of this notion is tremendously appealing. It also reminds me of a lesson in spirituality I learned last summer while touring the ancient Greek city of Aphrodisias. Here, I was surprised when one of my companions bowed before a statue of the love goddess. “Do you truly believe in Aphrodite?” I asked Melinda afterward. “No,” she replied, “but I want to honor those in the past who did.”

Fair enough. Instructive, too. For this is how we usually encounter differences in spiritual beliefs, isn’t it? We find ourselves strangers in a strange land, be it at a friend’s weekend house or sightseeing abroad. When in Rome, should you venture into a conversation on religion, here are some ways to keep things amiable:

* First of all, relax. Just because people speak of their faith, it doesn’t necessarily mean they’re seeking converts. So try to avoid becoming defensive.

* When someone you’ve just met at a party mentions his or her religious affiliation, this only tells you so much. More and more people are experimenting with “salad bar” spirituality, mixing a little of this with some of that. There are, for instance, those who call themselves Jewish Buddhists. Keeping this in mind might prevent you from making a knee-jerk remark you’ll later regret.

* It’s probably not a good idea to ask a complicated question unless you’re willing to endure a complicated answer. Religious teachings (think of those thick volumes by Muhammad, Confucius or Joseph Smith) are notoriously difficult to summarize.

* Public symbols of one’s faith–a yarmulke, say, or a sooty forehead on Ash Wednesday–are not campaign buttons. The wearer is under no obligation to explain their significance to anyone.

* It’s best not to ask for proof that somebody’s religion is true. Having faith demands exactly that: faith. And if someone mentions that she’s an atheist or agnostic, bear in mind that these, too, are belief systems–and can’t be proved, either.

* Soul-searching has its place, but so does a nice chat about the weather. If your tablemate becomes too strident in his adherence to–or denunciation of–a particular faith, beware! At that point it’s probably best to recall the maxim about the perilous place of religion and politics in social discourse.

If following these guidelines sounds too cumbersome, you can always take comfort in the advice of the Dalai Lama. When asked what the essence of his own spirituality was, he answered with one word: kindness.