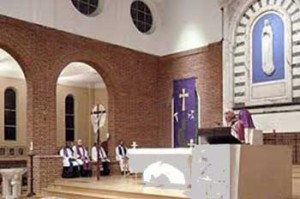 In university, author Patrick Glynn, a Harvard Ph.D, followed English philosopher Bertrand Russell in viewing man as “a curious accident in a backwater,” the inexplicable by-product of a random universe. Today he is a Christian, and science no longer supports atheism with its old enthusiasm either. “The totality of the evidence as I understood it in the mid-1970s suggested one conclusion [atheism],” he writes. “Today the evidence suggests quite a different one.”

He has built his book on the “anthropic principle,” a term coined by Cambridge University astrophysicist Brandon Carter in 1973. Mr. Carter used it to describe a phenomenon which previously had been only dimly perceived, namely the fact that all the seemingly arbitrary and unrelated constants in physics have one strange thing in common. They are precisely the values needed if the goal is a universe capable of producing life.

The existence and action of gravitational and electromagnetic force were known, of course, but simply as separate “constants.” Then came the insight that, in accordance with the anthropic principle, any variation in the gravitational constant in relation to electromagnetism would have resulted in a universe with no intermediate stars like our sun–only cooler “red” or hotter “blue” ones incapable of sustaining life. Similarly, any weakening of the nuclear “strong” force would have resulted in a universe consisting only of hydrogen.

Mr. Glynn supplies an extensive list of such “coincidences.” Furthermore, as British astronomer Fred Hoyle pointed out, at a point 10 to 43 seconds after the Big Bang began, the universe had to “know” how many types of neutrino there would be at one second–a precision that defies the idea of creation as a random event. Mr. Hoyle coined the term “big bang,” but has since come to question the aptness of the explosion metaphor. As he wrote in 1993, “An explosion in a junkyard does not lead to sundry bits of metal being assembled into a useful working machine.” “The more physicists have learned about the universe,” comments Mr. Glynn, “the more it looks like a put-up job.”

In what is probably his book’s most original contribution, he effectively contends that something like the anthropic principle is at work in other academic disciplines as well. For instance, no longer is psychology able to agree with Freud in dismissing faith as a form of mental disorder. On the contrary, studies have established a correlation between licentious conduct and unhappiness–“or what we might call, in plainer language, sin and misery.”

Thus the pretensions of psychotherapy get a highly satisfactory trashing. Its inability to speak coherently to the human condition, the author observes, was tragi-comically highlighted during the famous Woody Allen-Mia Farrow child custody case, which centred on Mr. Allen’s secret affair with Miss Farrow’s 19-year-old daughter. Thanks to his years in psychoanalysis, several psychiatrists could testify as to his fitness as a parent. But not one could say the affair was wrong–only that Mr. Allen “may have made an error in judgment,” or made “a mistake given the circumstances,” or that his actions were a reflection of the “postmodern family.” On the “changing family” argument the judge finally snapped, “We’re not at the point of sleeping with our children’s sisters.”

The chapter on psyche and soul gains impact from Mr. Glynn’s autobiographical revelations. Despite his commitment to live a life of “honour,” he confesses, in university he gained “the secret atheist insight: If God is dead, then everything is permitted.” Consequently there was nothing in his nihilistic universe to call forth personal sacrifice. Later on, when his marriage collapsed along with his one great cause in life–fighting the Cold War–he saw that by ignoring his conscience he had almost lost his own individual existence. The change that eventually led to faith began when he resolved to live as though there was a “You” at the heart of the universe.

His treatment of New Age spirituality is a masterful demonstration that it is “not spirituality, but [a] parody of spirituality” little removed from magic. His chapters on medicine and life after death are less convincing, however. He effectively relays studies that show health benefits accruing to lives built on faith (a “discovery,” incidentally, well known to any pastor with more than a few years of experience). Unfortunately he leaves the impression that almost any sort of faith will do, although he does point out that undue focus on petitional prayer (“O Lord, won’t you buy me a Mercedes Benz?”) can produce negative health results.

The chapter on near-death experience (NDE), while very thorough, is also disappointing. The book’s autobiographical introduction explains why NDEs hold a special fascination for Mr. Glynn. Nevertheless, rather than resting on his conclusion that “science has indeed stumbled on data of the soul,” his argument for life after death would have been more powerful had it been based on the evidence surrounding the resurrection of Jesus Christ.

In the book’s final chapter the author interestingly describes the struggle between the postmodern mind, which insists on an empty universe, and its heart, which will no longer tolerate such an idea. Unlike Enlightenment thinkers, who assumed that a moral vision would be maintained after the death of God, postmodern philosophers know better. They “can be seen reaching for a moral vision–the pale and confused reflection of New Testament agape or love,” which sometimes travels under the rubric of solidarity.

“Western philosophy is like the prodigal son of Jesus’ parable,” Mr. Glynn writes. “So untenable are his circumstances that even pride must eventually surrender…before he can return to the Father.” And this will happen to 20th-century philosophy, he believes: “Postmodernism is postsecularism waiting to be born.”

God: The Evidence is too short to satisfy an exacting reader, and many Christians will be troubled by its latitudinarianism. Still, it is arguably the best available brief introduction to the current state of the relationship between faith and reason. And any reader who wants more can be guided to the source materials listed in its abundant footnotes.