We all aspire to travel the world. Although it remains to be a dream for many, there are some individuals who really defy all the odds and go after their wanderlust. Many people can’t wait to travel to tropical dream destinations with its to-die-for beaches. However, if you don’t want to go far or break the bank, you can travel interstate because the U.S. is full of amazing natural or manmade attractions that can likewise satisfy your urge to travel. 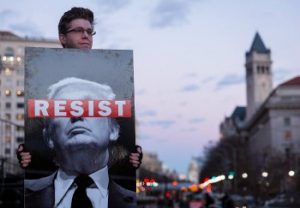 While many visitors are locals, a big number are still foreign tourists who are dying to see all the amazing places in America that have often been featured in the movies or popular TV shows. But U.S. tourism is now suffering a major slump as the string of travel bans has limited the number of tourists who can freely come in and out of the country for leisure. People are often choosing Canada, and cities like Montreal, which have their own amazing amenities. As a result, the U.S. tourism is hurting and the industries relying on tourists in making money are also suffering. His intentions may be good but it seems that they forgot to look into all possible consequences of this move and how it will affect the U.S. economy in general.

President Trump says he wants to keep out people who threaten the security of the United States. But his policies are discouraging tourists and threatening the American travel business, experts say.

One study forecasts a 10.6 million decline in visitors this year and next. The drop — nearly 7% of expected travelers — will cost the U.S. economy more than $18 billion and about 107,000 jobs, according to Tourism Economics, a forecasting firm used by the industry.

More than half of the lost business will be caused by reduced travel from Canada and Mexico. But experts say they are concerned about tourism declines from the U.K. and western Europe as well.

In March, Trump announced a 90-day freeze on visas for citizens of Syria, Iran, Libya, Somalia, Sudan and Yemen. Courts have blocked the visa restrictions. The Trump administration also banned travelers from 10 airports in Muslim majority countries from bringing laptops into the plane cabin.

The two policy changes, while controversial, were limited in scope. But the debate they have caused is discouraging travel far beyond the policies themselves.

“The travel ban, such as it is, would affect less than 0.1% of all visitors. But the whole rhetoric around it has damaged the U.S. brand as a destination,” said Adam Sacks, president of Tourism Economics. “It’s a very discretionary market. It takes very little for them to shift their travel plan and preferences.”

While these travel bans only applies to citizens of certain high-risk countries, its message to the world at large was far from friendly. Hence, tourists who like traveling the world intentionally avoid the U.S. now and go to other places instead to have fun.

The rhetoric around president Trump’s US travel ban has damaged the US brand, experts say.

A study has forecast that president Trump’s travel ban could spark a 10.6 million decline in visitors to the US between this year and next.

Tourism Economics predicts the drop, which it expects to be nearly 7% of expected travellers, could cost the US economy $18 billion and 107,000 jobs.

More than half of the anticipated drop would be caused by reduced travel from Mexico and Canada, but Tourism Economics’ experts say they are also concerned about declines from the UK and other countries in Western Europe.

The U.S. economy benefits a lot from foreign tourists, whether they like to admit it or not. And for a country like the U.S. which is a melting pot of different nationalities and cultures, it can have a big impact and discourage other nationalities as well for this blatant act of racism and discrimination. When you look at it, a big number of the U.S. workforce is made of professional and skilled foreign workers who help drive the economy up. However, this travel ban shouldn’t come as a surprise either knowing Donald Trump’s racist nature.

Nevertheless, the damage has been done and foreign tourists decided to ban travel to the U.S. themselves rather than support a country that is not friendly to foreigners at all. But considering this is just the beginning of Trump’s administration, we can only wait and see what is in store for the next four years and watch out what new alliances will be formed and broken in the process.