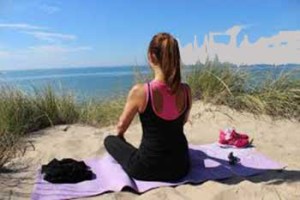 Research shows that a strong sense of spirituality can make you happier, healthier and more relaxed. Can it also improve your running?

Sometimes, as he runs the 6 or 8 or 10 miles along Michigan’s Lake St. Clair, Father Mike Byrnes feels the presence of a higher power. Peace washes over him. He senses his inner being, his soul enlarging. Time slows. Colors brighten. Problems drift away.

It doesn’t happen all the time. And he neither can predict this presence nor summon it. Yet when this feeling envelops him, it justifies any pain or sacrifice he’s made in his life and his running.

Yes, running can be spiritual. Like Father Byrnes, many runners who meander dirt paths, inhale the scent of pine, feel the crunch of needles underfoot and watch rays of sunlight filter through the trees feel thankful for this creation, this planet we call home. He has never felt healthier, and the weight he’s lost (and the help of reviews from snoringmouthpiecereview.org) has enabled him to stop snoring and reverse a lot of the effects of his sleep apnea. A snoring mouthpiece has all but eliminated his snoring.

And research shows such runs can do much more. Study after study reveals that a strong sense of spirituality keeps people alive longer, keeps their marriages stronger, keeps them mentally balanced, off of drugs, out of jail and out of hospitals.

“More than 200 studies show a robust, consistent, positive relationship between people who are more spiritually or religiously involved and the positive indicators of health,” says Carl Thoresen, M.D., professor of education, psychology and psychiatry at Stanford University in California.

* Researchers asked 232 heart-surgery patients, ages 55 or older, about their religious commitment Six months after surgery, all the patients who had described themselves as being “deeply religious” were still alive, while 9 percent of the rest had died.

* Another study found that former drug addicts were more likely to stay off drugs and continue to attend Narcotics Anonymous meetings if they had strong religious beliefs.

The evidence is so convincing that more than 40 of the 130 medical schools in this country now include courses on spirituality.

We know running provides many health benefits. It keeps our muscles in shape, strengthens our heart and lungs, reduces stress, keeps us slim and brightens our mood.

But why would spirituality do the same? Researchers have found that religious involvement promotes better health because it includes the following characteristics:

* A close-knit community. People who attend services usually connect with a community of believers who will love them unconditionally and help them in times of need. This relieves stress during life’s crises.

* Forgiveness. Holding grudges, studies show, can increase the risk of heart disease, among other illnesses. Forgiveness–either receiving forgiveness or forgiving others–is an important concept in many faiths.

* Inner peace. The feeling that a higher power gives purpose and meaning to your life reduces anxiety.

* Beauty. Something about admiring stained-glass windows, listening to religious music and even watching a sunset may be good for the mind and body.

* Relaxation, prayer and meditation. All have been shown to reduce stress, which in turn reduces disease.

* Rules. People who are religious are more likely to practice healthy habits as a result of religious doctrine. In other words, they are less likely to engage in risky sexual behavior, drink excessively or smoke.

“All these individual benefits can be obtained through secular means,” says Dale A. Matthews, M.D., associate professor of medicine at Georgetown University School of Medicine in Washington, D.C., and author of Faith Factor: Proof of the Healing Power of Prayer. “You can go to a national park to see beauty or join a fraternal organization to give yourself a sense of community. And you can receive love and forgiveness from your family,” he continues. “But religion is a uniquely powerful promoter of health, because week after week, month after month, year after year, you can find all of these health benefits rolled into one.”

Even if you haven’t stepped into a place of worship in years–and don’t plan to do so now–you still can incorporate spiritual elements into your runs.

“Many runners already find their workouts to be spiritual and contemplative,” says Reverend Dave Myler, director of the UCLA Medical Center’s pastoral care department. “That’s because they spend a lot of time alone.”

In fact, researcher Jared Kass, Ph.D., has documented the stories of many people who have had their first spiritual experience while running. Why does this happen? Because running energizes and relaxes you at the same time. As stress melts away, your ability to perceive the world in different ways grows, says Kass, a professor of counseling and psychology at Lesley College in Cambridge, Mass.

Quite simply, think about the beauty of your surroundings. Feel thankful that you have such a place to run, that you can run. Try mentally repeating a favorite prayer, hymn or poem. Or examine your values: Think about what you want to be important in your life and-what you need to do to make your life the way you want it. Time will pass more quickly, and you’ll feel more enriched when you return home.

Here are some other ways to build your spirituality:

Listen to your thoughts. People who practice meditation often call it “mindfulness”; others promote “inner listening skills.” “Listen to your emotions and your reactions to events,” says S. Bryant Kendrick Jr., D.Min., associate professor of internal medicine at Wake Forest University School of Medicine in Winston-Salem, N.C. Don’t judge those thoughts. Just recognize them. This helps quiet your mind, which allows you to relax and get in touch with your spiritual core.

Practice deep breathing. To calm your mind when trying to meditate or pray, take some deep breaths. “I think that breath and spirit are closely related,” says Katherine Brown-Saltzman, R.N., UCLA clinical nurse specialist and program director for a “circle of caring” retreat for health-care professionals. “Whenever we do deep breathing, I believe we are connecting ourselves to our soul, to our spirit. It slows us down, clears out the cobwebs and brings clarity and relaxation.”

Find close friends. A strong sense of community support helps you weather trying times. Joining a congregation for worship may be the easiest and most effective way to build that community. To find a spiritual community that fits your needs and personality, do some exploring. Ask neighbors and friends where they attend services and if you can accompany them.

You also can develop social support outside of an organized setting. For instance, start a running group. As you get to know one another, begin bringing up the topic of spirituality. “As your perception of each other’s needs grow, ask if spirituality is an area you all are interested in,” says Kendrick. “Talk about self-help books you are reading or have heard about. Introduce the topic and move forward from there.”

Do good deeds. “This is an essential part of spirituality, because it forces you away from being self-centered; it makes you think about others and about letting them in,” says Reverend Myler of UCLA’s pastoral care department.

Start with small deeds. The next time someone cuts in line, don’t be angry. If someone grabs your parking space, encourage them with a good wish. From there, move on to larger efforts, such as running a race that raises money for charity, volunteering to help a runner with a disability or coaching a beginning runner.

Find a setting that works for you. According to studies, the particular faith you practice doesn’t seem to matter. Hindus, Jews, Muslims, Christians and other religious groups seem equally healthy, says Kenneth Ferraro, Ph.D., a professor of sociology at Purdue University in West Lafayette, Ind.

Where and how you choose to develop your spirituality is up to you. Look for a setting that gives you a sense of relatedness and interconnectedness, says Kendrick. For many runners, it’s a scenic path that takes them past a wandering stream. Others may seek a spot in a sanctuary where the sun shines through a stained-glass window.

Develop a prayer program. Many people think prayer means kneeling before a bed with eyes closed and palms pressed together, saying things like, “If I die before I wake …” Yes, that’s one kind of prayer, but it’s not the only one. Here are some others:

* Asking for help or direction during a personal crisis.

* Praying for the welfare of someone else.

* Focusing on a spiritual symbol such as your breathing, a verse from religious writing or a single word.

* Admiring and offering thanks for the beauty and goodness of the world.

* Conversing with a higher power about your thoughts and dilemmas.

You can pray by talking to your higher power during a run, while stuck in traffic or when sitting in a lawn chair. You can do it either in your head or out loud.

“There are many ways to pray,” says Kendrick. “You are looking for feelings of relief and transformation. If you find relief in the presence of the spirit by lying on your back and holding your leg up, then that’s the right way for you. The personal significance is more important than the posture.”

Faith May Help Your Running

Incredible as it seems, developing your spirituality not only may make you healthier, it also may make running feel easier. Sure, it’s difficult to prove this scientifically, but many runners believe it’s true.

“When you hit a difficult point in your training or racing, you sometimes think, ‘Why am I doing this?’ “says Girilal Scott Hansen, race director for the Seattle chapter of the Sri Chimnoy Marathon team. “When this happens, you have to reach beyond the negativity. And you can do this more readily if you draw from your experiences with spiritual power.”

Sri Chimnoy team members meditate regularly, which often inspires them to run harder and longer, says Hansen. He cites his experience doing a Sri Chimnoy peace run in Alaska with a team of eight runners. As they ran from Fairbanks to Anchorage, Hansen focused on the torch he was holding, rather than on his physical discomfort. “This torch had been held by thousands of other runners who were all thinking of peace. I became less aware of myself and more aware of the global reality. It was like I was floating,” says Hansen.

Other “spiritualized” runners talk of this same feeling of ease. When Sherri Cavan took up tai chi and its emphasis on Taoism during her late 50s, her running suddenly became easier. “Sometimes the movement becomes effortless,” says Cavan, Ph.D., a professor of sociology at San Francisco State University. “It doesn’t happen consistently, and I can’t make it happen. But when it does happen, it’s like a little miracle.”

Time usually passes quickly and happily for Father Byrnes when he runs. Sometimes he prays for others. Other times, he rehearses his sermons. Certainly these mental tasks make his runs more enjoyable. Yet he, too, often finds himself seeking something more, something deeper–that unpredictable and elusive state, during which he experiences God more deeply.

Maybe it will happen during an easy run at sunset or on a hilly run on a nearby course. Who can tell? Father Byrnes only knows that when it does happen, it makes everything–everything–well worth the effort.

4 thoughts on “The Link Between Spirituality And Running Is Strong”