It is that time of the year again when it is perfectly acceptable for people to wear out of this world outfits/costumes that mostly have a horror theme. Of course, it is Halloween. You can do as you wish. While adults have long since joined in on the fun of dressing up and partying, it is actually a celebration that kids looked forward to for the longest time. Each year, kids and their parents think of outrageous concepts for costumes and they wear it on that particular day when these youngsters flock to the street dressed up in all sorts of costume imaginable while holding their candy pails, knocking on homes and saying trick or treat. How adorable is that? It’s really an exciting time for these kids as they not only recreate a character they like but they also get lots and lots of candies that will last them for days or until they get a toothache. 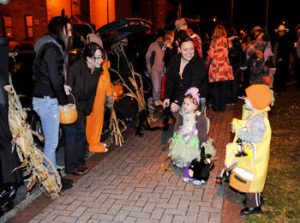 Far from the craziness and joy brought about by Halloween, the kid’s safety is something that should never be compromised. Most are actually accompanied by their parents or guardians but the older school child often goes out on their own with their squad without any adult supervision. Remember that these kids will be crossing the streets throughout the night and we all know the dangers of streets to children. Not all drivers are responsible on the street and the last thing we want is for kids to get into an accident when they are supposed to be having fun and look cute even when they want to look scary.

Safety is a top priority for trick-or-treaters and their parents this Halloween.

Some parents are concerned with poison candy or an increased risk of child luring during this holiday, but KREM 2 has verified those concerns were mostly urban legend.

The biggest risk for kids during Halloween is getting hit by a car, according to the Safe Kids Organization.

The Safe Kids Organization reported that children are twice as likely to get hit by a car and killed on Halloween compared to other nights.

Statistics from the Federal Highway Administration showed pedestrian deaths have increased every year since 2009.

Organizations and police recommend parents go Trick-or-Treating with their kids on Halloween and attach glow sticks, flashlights, and reflective tape to costumes so they’re easier for drivers to see.

It is understandable why parents are stressed out during Halloween. They not only have to think about the concept for the costumes ahead of time and prepare their children but they have other worries too. Imagine the dangers of the street, of dangerous treats, and of the possibility of your young trick-or-treater getting kidnapped while out there asking for treats is no joke. It is seriously alarming, which is why parents and the authorities step up their game once Halloween comes to prevent any untoward incidents from happening.

Ayanna Williams with PennDOT says there are some simple things all kids can do to stay safe.

“Trick or Treat in a group, instead of by yourself, avoid wearing masks that obstruct peripheral vision, walk on the sidewalk if one is available, or walk on the left side of the road facing traffic, never walk in between parked cars, always cross the street at the corner and always obey traffic signals,” said Williams.

Officials say it’s not just the kids who need to be extra cautious, drivers need to do their part too.

“We’re asking motorist to slow down, use their headlights, pay attention when they are entering and exiting their driveways,” said Tidwell.

Everyone should keep all these things in mind to ensure your young one’s safety when they are out prowling the streets in search for candies, candies, and more candies. People will likely be partying during this time and may end up driving home drunk, which can lead to an unfortunate disaster. The statistics support that claim. Kids are four times at higher risk of getting into a street accident at this time of the year than any other. Let that be a warning to be extra cautious and if possible, accompany your children to ensure they get home safe and sound with a pail overflowing with goodies and lots of sweet treats.