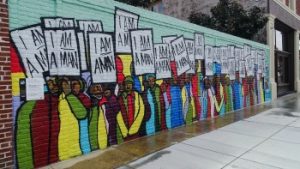 The protests started almost immediately after the presidential election. An artist named Annette Lemieux emailed the Whitney Museum and asked that her installation Left Right Left Right — a series of life-size photographs of raised fists turned into protest signs — be turned